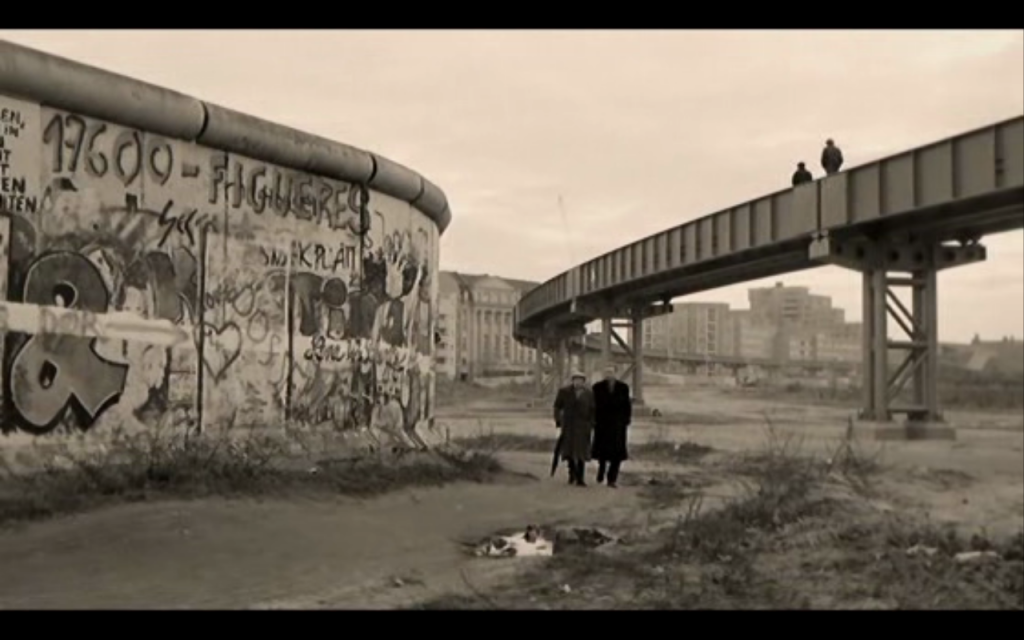 “WE LOVE MAKING MOVIE” is the slogan by Babelsberg Studios.

The passion for the movie, at the same time for Berlin unites me and my friend Francesco. He organizes an interesting Tour called “CINEMA IN BERLIN” in collaboration with Berlino Explorer.
An itinerary to discover some of the thousand places, the protagonists of the films that have made the history of Berlin in the movie production: the anecdotes and history of the German capital are combined with plots of the film, weaving reality with fiction, espionage with the ‘actuality.

With the help of pictures and videos you can relive some of the most famous scenes set in the city, lowering himself for a moment in the role of  Lola (“Run Lola Run”) or the angel Damiel (“Wings of Desire”) . Because the history of Berlin is also made of celluloid.

ITINERARY TOUR :
Warschauer Straße.  Oberbaum Brücke, from RUN LOLA RUN (1998 by Tom Tykwer) and the action scenes of BOURNE SUPREMACY (2004). Sprinting through the reunited city in the late 1990s, Franka Potente’s Lola swiftly became an international symbol of Germany’s new dynamism. Director Tom Tykwer hurled her pell-mell around Berlin, picking locations from east and west in a thriller that plays out three times, with three different outcomes. The film is very much a what-might-have-been story, with a happy ending, which is perhaps what we want to feel about Berlin itself.

Alexanderplatz. From the television series BERLIN Alexanderplatz by Fassbinder to GOODBYE LENIN (2003), the most popular locations in the German capital. A dedicated young German boy pulls off an elaborate scheme to keep his mother in good health in this comedy drama from director Wolfgang Becker.
Suffering a heart attack and falling into a coma after seeing her son arrested during a protest, Alex’s (Daniel Brühl) socialistmother, Christiane (Katrin Sass), remains comatose through the fall of the Berlin wall and the German Democratic Republic.

Hauptbahnhof and the Bundestag. From science fiction movie AEON FLUX (2005) and EQUILIBRIUM (2002) wonderful unexpected set location. Most of the filming used locations in Berlin, due to its unique mixture of fascist and modern architecture. In a Fascist future where all forms of feeling are illegal, a man (Christian Bale) in charge of enforcing the law rises to overthrow the system.

Potsdamer Platz. The square of the angels of WINGS OF ANGELS by Wim Wenders. (1987), when he turned the square was still a wasteland. Arguably the finest film about the divided city was made by Wim Wenders in 1987 – a fable about angels floating over a traumatised Berlin, listening to its inhabitants’ thoughts, and attempting, in different ways, to heal their pain. Two years after the fall of the Berlin Wall, Potsdamer Platz will become the largest building area of Europe; the result of reconstruction is the current, modern place you can see today.

Zoologischer Garten from the movie CHRISTIANE F, by Uli Edel (1981). Christiane F. We Children from Bahnhof Zoo in English) is a 1981 German film based on the autobiographical recordings of a young heroin addict and prostitute in West Berlin. It was one of the most successful German films of that year, going on to become a worldwide cult hit, but one that stirred up a lot of (I think justifiable) controversy. In the late 70s and early 80s, West Berlin’s reputation for radicalism and experimentation made it a mecca for youth at the time: but there was a dark side, encapsulated in this notorious film about a drug-addicted prostitute. Bahnhof Zoo was West Berlin’s biggest rail station at the time, and the film-makers also shot extensively in Christiane’s home district of Gropiusstadt, the southern suburb designed by the Bauhaus founder.

Berlin was once Germany’s Hollywood, the capital of German cinema, home to the nation’s biggest movie company, the UFA, and stars such as Marlene Dietrich. The golden age of German and Berlin cinema was the interwar period, although following 1933 the Nazis gained a stranglehold over the industry and converted it in steps to a propaganda instrument. The Second World War pretty much killed off Berlin’s film industry. The UFA fled to western Germany, and its interests in the GDR were taken over by the state-owned DEFA, which continued to operate out of the Babelsberg Studios – albeit with little international success.

Following Berlin’s reunification, the multiplexes came to town: purpose-built, multiscreen movie theaters sprung up in all the major centers. They filled a huge gap in the market, especially on the eastern side of the city, bringing mainstream cinema to more Berliners than ever before, especially those along the Ku’damm were unable to compete and the turn of the century saw the great “Kinosterben” (film theatre die-off). Now the market is mainly divided up between the big multiplexes and smaller local / art-house cinemas. Nevertheless there’s a huge choice of venues, and something for every taste.

In the last years in Berlin has become In recent years Berlin has become a central point for foreign productions. (THE PIANIST, VALKIRIE, CLOUD ATLAS, V for VENDETTA). Just in the 2013 for the first time in Studio Babelsberg’s history, the studio celebrates three international film premieres at the Berlin International Film Festival
(Berlinale). Besides the premieres of Wes Anderson’s THE GRAND BUDAPEST HOTEL and George Clooney’s THE MONUMENTS MEN, today the Berlinale officially announced the screening of BEAUTY AND THE BEAST directed by Christophe Gans. Vincent Cassel and the French up and coming star Léa Seydoux are featured in the main roles
in the high budget remake of the fairy tale classic, shot entirely at Babelsberg studios.